- October 06, 2010
I went to explore South Tamil Nadu on a one day trip with my parents,aunt,uncle and my cousin in their car.It was on the 30th of May.The next day our school was going to reopen.I didn't go anywhere for the whole summer vacation,so we thought we will at least go on that Sunday.
Well, we started our journey.We took the -nagercoil route which was easy for us.Our first trip was to the Padmanabhapuram palace in Kanyakumari district.This was the kingdom of the royal Tiruvitamkur family.It was the best palace I've ever gone.Large, with so much space.A malayalam film 'manichitrathazhu's shooting took place here.We thought the 'Verandah' of this palace was made up of original marble.But it was made up of lime,eggs,cowdung,mehendi and eggshells.The effect was even better than marble.The carvings on wood were perfect.Not even a mistake was there. The king's bed was marvelous.The carvings on this bed was perfect.Well,no one can break into the palace easily.I'm sure they'll get lost.They have built the palace in such a way that the king himself would also lose his way easily.I liked this palace very much.I didn't want to leave this place.I even wanted to stay here for the rest of my life!.
Our next site was the marvelous place called Kundankulam.Kundan was the nick name ,my uncle used to call my father,so we teased this place.This place is actually a bird sanctuary.This was an idea of my uncle because he is an environmentalist.The road to kundankulam was marvelous.We were surrounded by the western ghats on one side and the other side was covered with wind mills.This was the best place I've ever gone and it is in called Arulvamozhi.Never am I gonne forget this place in my whole life!
At last the last hill passed and now there was neither a hill nor a wind mill.But as we went straight to kundankulam we had to fight the hottest climate.I thought we were really at last in a desert.It was another world, apart from arulvamozhi.We reached the bird sanctuary.It was like a thirsty camel seeing an oasis in a desert.We too got a glimpse of water.WATER!I was relaxed.This bird sanctuary in this kind of climate was marvelous.Birds from all over the world are here.They migrated from far away places to this place.
We again got the glimpse of a wind mill and hill on our way to Triparap water falls.The route to this water falls was superb.We were surrounded by thousands of trees on each corner.And the same beautiful journey back on the same day ...........made the last day of my holidays wonderful.
[check najmafaizi.blogspot.com-she is my cousin sister I mentioned]
Articles

Popular posts from this blog 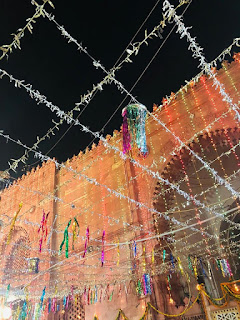 Nizamuddin Dargah at night is a beauty unparalleled. Though I've been to the place quite a few times and all in the mornings and despised the state of the place at all times, the dargah at night made me fall in love with each of its corners that I despised and each of its people that I felt sorry for.  There is something magical about its air once the sun sets. Adorned in the soft glow of  yellow lights and coloured papers that hang mid air, the dargah and its narrow alleyways are a sight to behold. And then there are those small shops inside its alleys, selling rose petals, colourful 'chadars', athars, rings and tasbis that beam in the glory of the night, adding to the mystique of the place. As a qawwali enthusiast, I've literally grown up listening to qawwalis that sing praise of Hazrat Nizamuddin Auliya (most of which were composed by Amir Khusro, whose tomb lies just opposite the sufi saint's). And the first time I visited the place, I expected to be transcen
Read more

The Cat which lived in my Suitcase

- May 02, 2020
A sinister looking cat; black Lived in my suitcase On odd winter nights. On even nights, I'd straighten My suitcase; a golden brown ; Heavy from the chips I had brought from home. The night after I found the cat Sleeping on my bed next to my head, I bolted the room And sealed it from him. How do I let a cat steal my thoughts, Staring at me  from my bed, While I sleep? But on other odd winter nights I'd still forget to lock the room And the hostel cat Would sneak in for the heat Of my suitcase. The next day I decided To prepare my dead suitcase Into a living room for this cat Which must have had mutliple names In the history of her hostel life. I removed the packets of chips And the few unwashed clothes inside. For want of old clothes for comfort, I placed the soft posters and The slogan printed fabric I had collected from the protests Around the city, on one side And a few newspapers, On the other. The cat sneaked in one odd night, And
Read more

The Book Launch In Frames 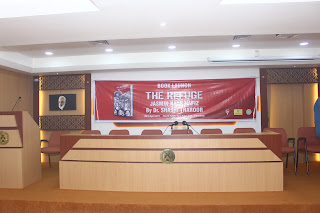